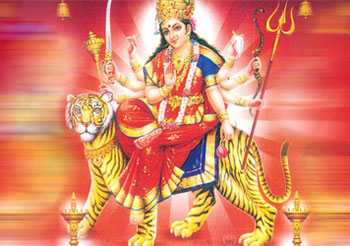 Chaitra Navratri or Vasant Navratri, is a nine day festival which starts on the first day Indian Luni - Solar calendar and celebrated in the month of March or April. It got its name from the first month of Hindu lunar calendar i.e. Chaitra and that is why it is called Chaitra Navratri. According to English calendar it occurs in late March or early April. In most parts of India it is considered as the beginning of a new year for the Hindu calendar.

Chaitra Navratri dates in 2021 are from 28th March to 05th April. It is a nine days festival falling in the first month of Hindu calendar i.e.Chaitra. It has many other names like Vasant Navratri or Basant Navratri or Ram Navami. It is celebrated during Basant ritu. The legend behind Chaitra Navratri is of Prince Sudarshan that how he gratified the Divine Goddess and got blessed from Her and gained success due to Her blessings. On the eighth or ninth day of Chaitra Navratri people feed little girls who are below the age of nine. These girls are called Kanjaks or Kanyas and considered as the symbol of Goddess Durga. Gifts and money are also offered to these kanyas.

We hope that this information will be helpful to get to know about Chaitra Navratri 2021 and you will be able to perform all the rituals whole heartedly.