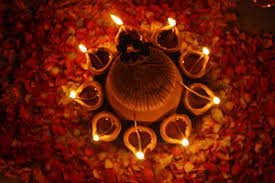 On this five days festival various rituals are done with the worship of Lord Ganesha and Goddess Lakshmi. On this festival several other Gods and Goddess are worshipped. Diwali Pooja is done after sunset in homes as well as in shops, offices etc. This year Lakshmi Puja Muhurta will start on 16:27 PM and end on 20:09 PM. On this day peoples clean and decorate their homes, shops and offices by lighting, flowers, Ashoka leaves etc. On the night of Diwali lamps are lighted in all the places, lamps are kind of candles, diye or electronic jhaalar. Ladies decorate their floor by making rangolis using different powder colors. After finishing the Lakshmi Pooja children's and their parents light fire-crackers which is called Pathake or aatishbaazi in Hindi. Some people enjoy gambling on the night of Diwali.

As this is said that on this day Lord Shri Ram return back to Ayodhya after 14 years of exiled (vanvaas), so people of Ayodhya enjoyed the day, this custom is being followed by people till now.